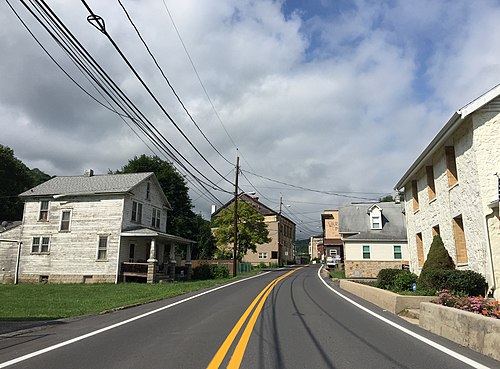 Mount Savage is an unincorporated community and census-designated place (CDP) in Allegany County, Maryland, United States. As of the 2010 census it had a population of 873.A small blue-collar community, Mount Savage lies at the base of Big Savage Mountain in the Allegheny Mountains, between the cities of Frostburg and Cumberland. It began as a small farming settlement in the mid-19th century, but it was not until 1844 that the region was put on the nation's map with the pressing of the first iron rail in the United States. After this claim to fame, Mount Savage became the fifth largest city in Maryland. Named as the headquarters for the Mount Savage Railroad and later the Cumberland and Pennsylvania Railroad (C&P), the area was deemed an industrial center. In addition to the rail businesses, Mount Savage attracted a foundry, two brick refractories, and several local merchants. In this company town, the industries shaped the economy and topography of Mount Savage, building housing for workers and donating land for schools, churches, and other public buildings. It was a cultural melting pot attracting English businessmen and Irish, Scottish, Welsh, Italian, and German workers. With this diverse mix of cultures, the identity of Mount Savage was molded into a close-knit community. Despite the loss of the industries to the region, Mount Savage continues to celebrate its hard-working traditions. The Mount Savage Historic District was listed on the National Register of Historic Places in 1983.