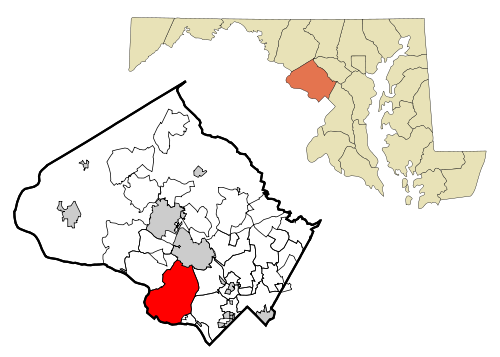 Potomac (listen ) is a census-designated place (CDP) in Montgomery County, Maryland, United States, named after the nearby Potomac River. In 2013, CNNMoney listed Potomac as the most affluent town with more than 25,000 residents in the United States, based on median household income. According to Forbes, Potomac is also the seventh most educated small town in America, based on percentage of residents with postsecondary degrees. Bloomberg Businessweek labeled Potomac as the twenty-ninth-richest zip code in the United States in 2011, stating that it had the largest population of any U.S. town with a median income of more than $240,000. In 2012, The Higley Elite 100 published a list of highest-income neighborhoods by mean household income, which included four neighborhoods in Potomac; one of these neighborhoods, "Carderock-The Palisades" was ranked the highest-income neighborhood in the United States, followed by "Beverly Hills-North of Sunset" in Beverly Hills, California and "Swinks Mill-Dominion Reserve" of McLean, Virginia. More recently, two Potomac neighborhoods were ranked among the ten wealthiest neighborhoods in the country by CNBC in 2014. In 2018, data from the American Community Survey revealed that Potomac was the sixth-wealthiest city in the United States. Many Potomac residents work in nearby Washington, D.C.