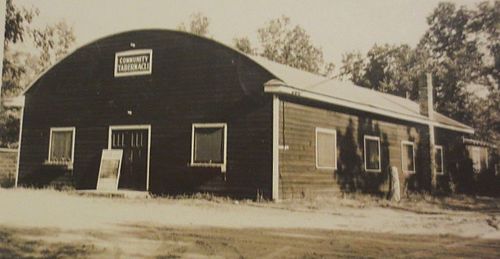 Idlewild is an unincorporated community in Yates Township, located just east of Baldwin in southeast Lake County, a rural part of northwestern lower Michigan. During the first half of the 20th century, it was one of the few resorts in the country where African-Americans were allowed to vacation and purchase property, before discrimination was outlawed in 1964 through the Civil Rights Act of 1964. The surrounding area is within Manistee National Forest. The community encompasses Lake Idlewild, and the headwaters of the Pere Marquette River extends throughout the region. Called the "Black Eden of Michigan", from 1912 through the mid-1960s, Idlewild was an active year-round community and was visited by well-known entertainers and professionals from throughout the country. At its peak, it was one of the most popular resorts in the Midwest and as many as 25,000 would come to Idlewild in the height of the summer season to enjoy camping, swimming, boating, fishing, hunting, horseback riding, roller skating, and night-time entertainment. When the 1964 Civil Rights Act opened up other resorts in many states to African-Americans, Idlewild's boomtown period subsided. Though not quite a "ghost town" as claimed in the book Ghost Towns of Michigan, Chapter 7, the population was under 1,000 in 2019, and numerous buildings were vacant. The Idlewild African American Chamber of Commerce, founded in 2000 by John O. Meeks, continues to promote existing local businesses and seeking new ones. It is also striving to attract more visitors to the area, with events and other strategies, in hopes of resuscitating the once lively town.