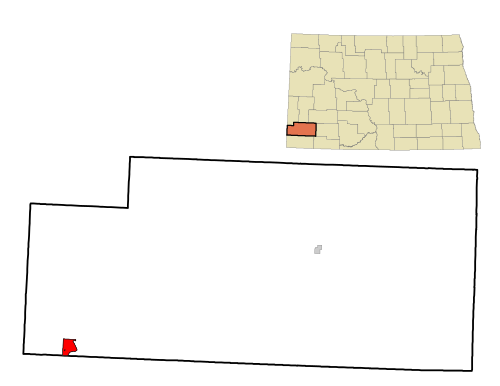 Marmarth ( MAR-məth) is the largest city in Slope County in the U.S. State of North Dakota with a population of 143 as of 2014. It is situated in the southwestern part of Slope County, along the Bowman County line in the southwestern part of North Dakota, just seven miles east of the Montana border. Marmarth was founded as a railroad town along the Milwaukee Road from Seattle, WA to Chicago, IL. By 1920, Marmarth had over 1,300 residents. The town's population declined during most of the 20th century and was only 143 in 2014. There is one restaurant and one bar still located in Marmarth in 2013.The town is recognized for various historical events, including Native-American Lakota history, the discovery of the Dakota fossil and various other dinosaur skeletons, the attack on James L. Fisk by Sitting Bull, and several visits by former president Theodore Roosevelt. Roosevelt visited Marmarth on several occasions and killed both his first buffalo and his first grizzly bear by the Little Missouri River in Marmarth. The old ranch house on Hay Creek in which Roosevelt stayed during his visits is still standing. Another visited attraction in town is the “Woman in Stone”, which is a 50-foot rock depicting the face and hairline of a woman. The town is located 50 air miles and nearly 100 road miles from Theodore Roosevelt National Park. Marmarth is adjacent to the Little Missouri National Grassland, and is also the closest city to Big Gumbo, a 20,000 acre federally owned public wilderness area administrated by the Bureau of Land Management.Several movies and TV shows have been filmed in the Theodore Roosevelt National Park, including the Wooly Boys, History Hogs and The Indomitable Teddy Roosevelt, all which were filmed in neighboring Billings County.