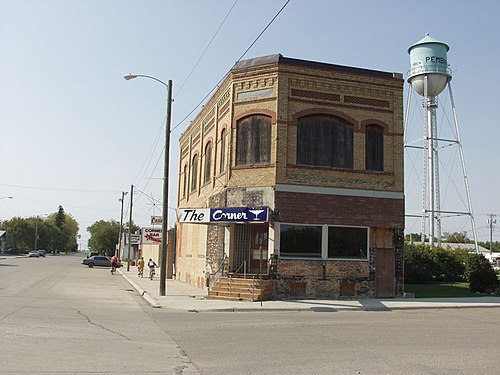 Pembina ( (listen)) is a city in Pembina County, North Dakota, United States. The population was 592 at the 2010 census. Pembina is located 2 miles (3.2 km) south of the Canada–US border. Interstate 29 passes on the west side of Pembina, leading north to the Canada–US border at Emerson, Manitoba and south to the cities of Grand Forks and Fargo. The Pembina-Emerson Border Crossing is the busiest between Blaine, Washington and Detroit, Michigan and the fifth busiest along the Canada-United States border. It is one of three 24-hour ports of entry in North Dakota, the others being Portal and Dunseith. The Emerson-Noyes border crossing, located 2 miles (3.2 km) to the east on the Minnesota side of the Red River, also processed cross border traffic until its closure in 2006. The area of Pembina was long inhabited by various indigenous peoples. At the time of 16th century French exploration and fur trading, historical Native American tribes included the Lakota (Sioux, as the French called them), the Chippewa (Ojibwe), and the Assiniboine. The British/Canadian Hudson's Bay Company (HBC) established a fur-trading post on the site of present-day Pembina in 1797, and it is the oldest European-American community in the Dakotas. The first permanent HBC-sponsored settlement in Pembina started in 1812. Prior to the Treaty of 1818, Pembina was located in Rupert's Land, the HBC's trading territory. The treaty transferred the Red River Valley south of the 49th parallel to the United States, but until 1823, both the United States and the British authorities believed Pembina was north of the 49th and therefore in Rupert's Land. That year United States Army Major Stephen H. Long's survey of the 49th parallel revealed Pembina's location to be just south of the Rupert's Land – United States border. Pembina was officially founded in 1843. In 1851, the US established its first post office in present-day North Dakota in Pembina. Pembina was the most populous place in North Dakota according to the 1860 census. Pembina served as county seat from 1867 to 1911, being designated as a town in 1885.Pembina is home to the U.S. satellite plant of Motor Coach Industries, which completes assembly of intercity buses. Its major clients include Greyhound Lines.