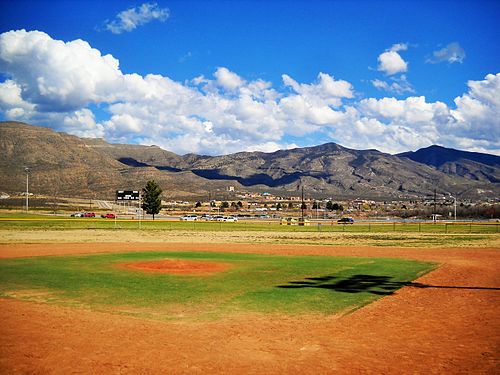 Alamogordo is the seat of Otero County, New Mexico, United States. A city in the Tularosa Basin of the Chihuahuan Desert, it is bordered on the east by the Sacramento Mountains and to the west by Holloman Air Force Base. The population was 30,403 as of the 2010 census. Alamogordo is known for its connection with the 1945 Trinity test, which was the first ever explosion of an atomic bomb. Humans have lived in the Alamogordo area for at least 11,000 years. The present settlement, established in 1898 to support the construction of the El Paso and Northeastern Railroad, is an early example of a planned community. The city was incorporated in 1912. Tourism became an important economic factor with the creation of White Sands National Monument( still one of the biggest attractions of the city today). in 1934. During the 1950–60s, Alamogordo was an unofficial center for research on pilot safety and the developing United States' space program. Alamogordo is a charter city with a council-manager form of government. City government provides a large number of recreational and leisure facilities for its citizens, including a large park in the center of the city, many smaller parks scattered through the city, a golf course, Alameda Park Zoo, a network of walking paths, Alamogordo Public Library, and a senior citizens' center. Gerald Champion Regional Medical Center is a nonprofit shared military/civilian facility that is also the hospital for Holloman.