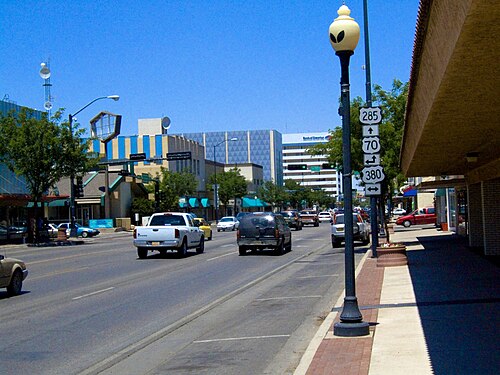 Roswell is a city in, and the seat of, Chaves County in the U.S. state of New Mexico, the county forms the entirety of the Roswell micropolitan area. As of the 2010 census it had a population of 48,411, making it the fifth-largest city in New Mexico. It is home of New Mexico Military Institute (NMMI), founded in 1891. The city is also the location of an Eastern New Mexico University campus. Bitter Lake National Wildlife Refuge is located a few miles northeast of the city on the Pecos River. Bottomless Lakes State Park is located 12 miles (19 km) east of Roswell on US 380. The Roswell UFO incident was named after the town, though the crash site of the alleged UFO was some 75 miles (121 km) from Roswell and closer to Corona. The investigation and debris recovery was handled by the local Roswell Army Air Field. In the 1930s, Roswell was a site for much of Robert H. Goddard's early rocketry work. The Roswell Museum and Art Center maintains an exhibit that includes a recreation of Goddard's rocket engine development workshop. Roswell's tourism industry is based on aerospace engineering and ufology museums and businesses, as well as alien-themed and spacecraft-themed iconography. The city also relies on New Mexico and Americana related tourism. New Mexican cuisine restaurants, such as Martin's Capitol Café, are located near downtown on Main Street, near the International UFO Museum and Research Center. Local American folk and New Mexico music performances occur near Pioneer Plaza and in parks around the city. It is a center for acequia-similar irrigated farming, dairying, and ranching, it also the location of several manufacturing, distribution, and petroleum related facilities. This regional pride has resulted in Roswell receiving the All-America City Award multiple times, in 1978–79 and 2002.