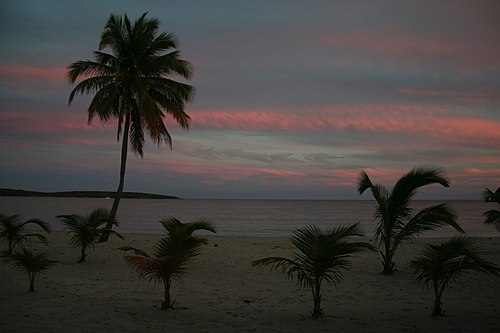 Vieques (; Spanish pronunciation: [ˈbjekes]), in full Isla de Vieques, is an island–municipality of Puerto Rico, in the northeastern Caribbean, part of an island grouping sometimes known as the Spanish Virgin Islands. Vieques is part of the Commonwealth of Puerto Rico, and retains strong influences from 400 years of Spanish presence in the island. Vieques lies about 8 miles (13 km) east of the Puerto Rican mainland, and measures about 20 miles (32 km) long by 4.5 miles (7 km) wide. Its most populated barrio is Isabel Segunda (sometimes written "Isabel II"), the administrative center on the northern side. The population of Vieques was 9,301 at the 2010 Census. The island's name is a Spanish spelling of a Native American (likely Taíno) word said to mean "small island". It also has the nickname Isla Nena, usually translated as "Little Girl Island", alluding to its perception as Puerto Rico's little sister. The island was given this name by the Puerto Rican poet Luis Llorens Torres. During the colonial period, the British name was "Crab Island". Vieques is best known internationally as the site of a series of protests against the United States Navy's use of the island as a bombing range and testing ground, which led to the Navy's departure in 2003. Today the former navy land is a national wildlife refuge; some of it is open to the public, but much remains closed off due to contamination and/or unexploded ordnance that the military is slowly cleaning up. Some of the most beautiful beaches on the island are on the eastern end of the island (formerly the Marine Base) that the Navy named Red Beach, Blue Beach, etc., now called Playa Caracas, Pata Prieta, Playa La Chiva, and Playa Plata. At the far western tip (formerly the Navy Base) is Punta Arenas, which the Navy named Green Beach. The beaches are commonly listed among the top beaches in the Caribbean for their azure waters and white sands.