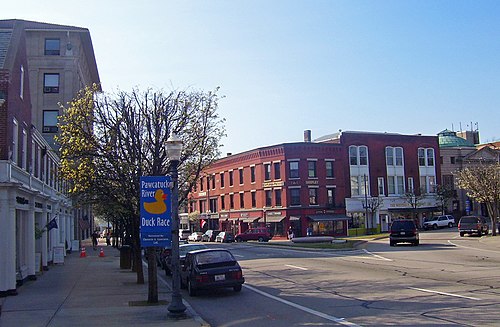 Westerly is a town on the southwestern shoreline of Washington County, Rhode Island, first settled by English colonists in 1661 and incorporated as a municipality in 1669. It is a beachfront community on the south shore of the state with a population of 22,787 as of the 2010 census. The Pawcatuck River flows on the western border of Westerly and was once renowned for its own species of Westerly salmon, three of which are on the town's official seal. The river flows from 15 mi (24 km) inland, emptying into Little Narragansett Bay. It also serves as the boundary between Westerly and Pawcatuck, Connecticut. Three large salt ponds lie along the coast of Westerly which serve as shallow, reef-like pools whose outer walls form the long, white beaches for which the town is renowned. From west to east, these ponds are Maschaug Pond, Winnapaug Pond, and Quonochontaug Pond. The Westerly area was known for its granite and stone-cutting industry, which quarried a unique stone known as Westerly granite. This pinkish granite is ideal for statuary and has been used in numerous government buildings of several states on the eastern seaboard. Westerly becomes a popular tourist destination during the summer months when the population nearly doubles. Its well-known beaches include Weekapaug Beach, Westerly Town Beach, Misquamicut State Beach, East Beach, and Watch Hill Beach.