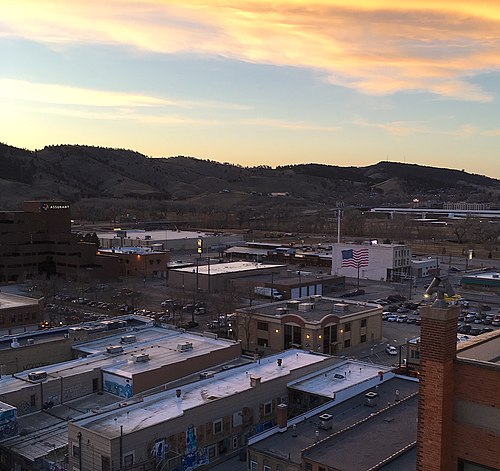 Rapid City (Lakota: Mni Lúzahaŋ Otȟúŋwahe; "Swift Water City") is the second most populous city in South Dakota and the county seat of Pennington County. Named after Rapid Creek, where the settlement developed, it is in the western part of the state, located on the eastern slope of the Black Hills mountain range. The population was 67,956 as of the 2010 Census.Known as the "Gateway to the Black Hills" due to its location and the "City of Presidents" because of the life-size bronze president statues located downtown, Rapid City is split by a low mountain ridge that divides the western and eastern parts of the city. Ellsworth Air Force Base is located on the outskirts of the city. Camp Rapid, a part of the South Dakota Army National Guard, is located in the western part of the city. Rapid City is home to such popular attractions as Art Alley, Dinosaur Park, the City of Presidents walking tour, Chapel in the Hills, Storybook Island, Main Street Square, and more. The historic "Old West" town of Deadwood is nearby. In the neighboring Black Hills are the tourist attractions of Mount Rushmore, the Crazy Horse Memorial, Custer State Park, Wind Cave National Park, Jewel Cave National Monument, the museum at the Black Hills Institute of Geological Research, and to the east of the city is Badlands National Park.