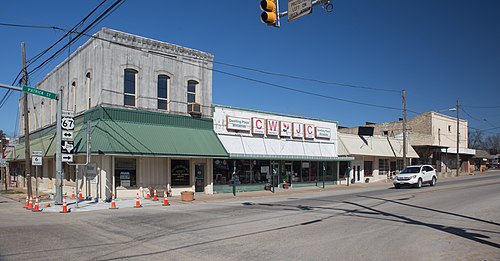 Dublin is a city located in southwestern Erath County in Central Texas, United States. The population was 3,654 at the time of the 2010 census, down from 3,754 at the 2000 census. The town is the former home of the world's oldest Dr Pepper bottling plant (see Dublin Dr Pepper). The plant was for many years the only U.S. source for Dr Pepper made with real cane sugar (from Texas-based Imperial Sugar), instead of less expensive high fructose corn syrup. Contractual requirements limited the plant's distribution range to a 40-mile (64 km) radius of Dublin, an area encompassing Stephenville, Tolar, Comanche and Hico. Dublin was the southern terminus of the Wichita Falls and Southern Railroad, one of the properties of Frank Kell, Joseph A. Kemp, and later Orville Bullington of Wichita Falls. The line was abandoned in 1954.Dublin was the boyhood home of legendary golfer Ben Hogan, who was born on August 13, 1912, at the hospital in nearby Stephenville. Hogan lived in Dublin until 1921, when he and his family relocated to Fort Worth. American jurist and 1924 Texas Republican gubernatorial nominee George C. Butte married and resided in Dublin for several years and is interred there at Live Oak Cemetery. Dublin is the birthplace of Lt. Col. George Andrew Davis, Jr., who was awarded the Medal of Honor for conspicuous gallantry and intrepidity at the risk of his life above and beyond the call of duty on 10 February 1952, near the Sinuiju-Yalu River area in North Korea. Davis ranks sixteenth on the list of most highly decorated U.S. military personnel of all time who received the Medal of Honor. In 2005, Governor Rick Perry signed a bill that designated Dublin as the official Irish Capital of Texas. Thus Dublin is known to be home to many people of Irish American descent.