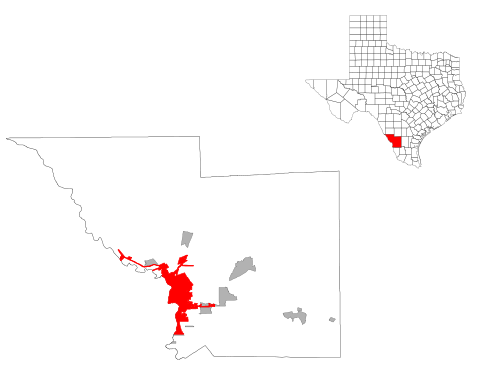 Laredo ( lə-RAY-doh; Spanish: [laˈɾeðo]) is a city in and the county seat of Webb County, Texas, United States, on the north bank of the Rio Grande in South Texas, across from Nuevo Laredo, Tamaulipas, Mexico. Laredo has the distinction of flying seven flags (the Flag of the Republic of the Rio Grande, which is now the flag of the city, in addition to the Six Flags of Texas). Founded in 1755, Laredo grew from a village to the capital of the brief Republic of the Rio Grande to the largest inland port on the Mexican border. Laredo's economy is based on international trade with Mexico. Many major transportation companies have a facility in Laredo. The city is on the southern end of I-35, which makes it close to the manufacturers in northern Mexico. It has four international bridges and one railway bridge. According to the 2010 census, the city population was 236,091, making it the 10th-most populous city in Texas and third-most populated on the Mexican border, after San Diego, California, and El Paso, Texas. Its metropolitan area is the 178th-largest in the U.S. and includes all of Webb County, with a population of 250,304. Laredo is also part of the cross-border Laredo–Nuevo Laredo Metropolitan Area with an estimated population of 636,516.Because Laredo is 95.6% Hispanic and Latino (overwhelmingly Mexican in origin), it is one of the least ethnically diverse cities in the United States. When economic, household, and social diversity are considered, Laredo is the 19th-least diverse of the 313 largest cities in the nation.Texas A&M International University and Laredo College are in Laredo. Laredo International Airport is within the Laredo city limits, while the Quetzalcoatl International Airport is nearby in Nuevo Laredo on the Mexican side. The biggest festival, Washington's Birthday Celebration, is held during the later part of January and the majority of February, attracting hundreds of thousands of tourists.