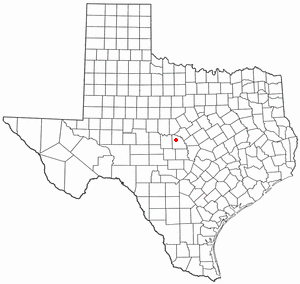 'Richland Springs, on U.S. Highway 190 fifteen miles northwest of San Saba in northwestern San Saba County, developed in the nineteenth century as a supply and processing center for local cotton growers and cattlemen. Jackson J. Brown and his family settled near the springs on Richland Springs Creek (then known as Richland Creek) in December 1854 and were soon followed by the Tankersley and Duncan families. A private fort, Fort Duncan, was established near the springs in the late 1850s when trouble arose with Indians on the frontier, but it apparently fell into disuse shortly thereafter. The Brown School was constructed in 1868 and named for the neighborhood's original settler. The area attracted settlers through the 1870s, and in 1877 a Richland Springs post office opened in the store of Samuel E. Hays. The community took its name from the nearby springs and from local enthusiasm for the agricultural promise of the region. By 1890 local production of cotton, grains, and livestock supported a settlement of 150 residents, including a justice of the peace precinct, a constabulary, and several commercial and craft businesses. A local newspaper, the Eye-Witness, began publication in 1905. Not long after, the First State Bank was organized, and in 1911 completion of a trunk line for the Gulf, Colorado and Santa Fe Railway linked the town with the main line between Galveston and Amarillo. Richland Springs incorporated in 1932 and adopted a mayor-council form of city government. With a population nearing 500 and as many as forty businesses, the town prospered until the onset of the Great Depression. World War II reversed the decline of the 1930s, and by the early 1950s residents numbered 600. The number of businesses still had not returned to predepression levels when a three-year drought in the mid-1950s crippled the local economy again. The town's only bank failed, and within a decade its residential and business populations had fallen by nearly half. An uneven recovery from the nadir of the 1960s was based on the production of local fruit and nut growers. In 1982 the town reported 420 residents and five businesses; by 1986 the number of businesses had risen to eight. In 1990 the population was 344. The population was 350 in 2000. (Handbook of Texas Online)