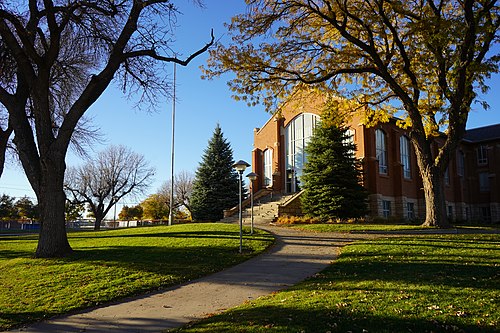 Blanding ( (listen)) is a city in San Juan County, Utah, United States. The population was 3,375 at the 2010 census, making it the most populated city in San Juan County. It was settled in the late 19th century by Mormon settlers, predominantly from the famed Hole-In-The-Rock expedition. Economic contributors include mineral processing, mining, agriculture, local commerce, tourism, and transportation. Blanding is located near both the Navajo and White Mesa Ute Native American reservations, and a significant percentage of Blanding's population has family ties to these nearby cultures. Blanding is a gateway to an abundance of nearby natural and archaeological resources, including The Dinosaur Museum, Natural Bridges National Monument, Monument Valley and the Four Corners area, Glen Canyon National Recreation Area (Lake Powell), Cedar Mesa archaeological and wilderness area, the San Juan River including Goosenecks State Park, and the Needles district of Canyonlands National Park. It is located approximately 1 hour south of the popular recreation hub of Moab and Arches National Park.