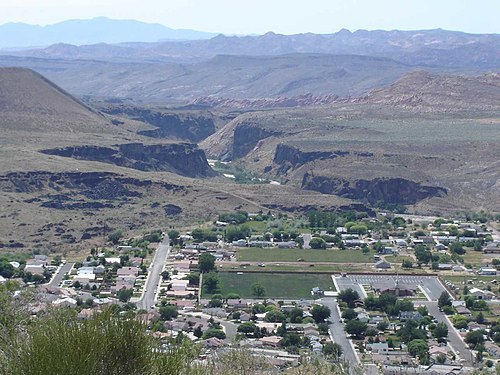 La Verkin is a city in Washington County, Utah, United States. The population was 4,060 as of 2010, an increase from 3,392 in 2000. La Verkin is within walking distance of Hurricane, and the two cities have historically had close ties. Theories about the origin of the city's name suggest that it may be a corruption of the Spanish la virgen, after the nearby Virgin River, or possibly an error in the transcription of the term "beaver skin."The city made national headlines in 2001 when the City Council passed an ordinance declaring La Verkin a "United Nations-free zone".La Verkin contains the southernmost highway junction to Zion National Park, at the intersection of Utah SR-9. The city is also home to Pah Tempe Hot Springs, a historic volcanic sulfur spring that sits on the edge of Virgin River. There is also a noted pony-truss style bridge, built in 1908, that rises some 200 feet (61 m) over the river, spanning over 75 feet (23 m) in length.La Verkin Elementary School is the only public school in the city. Higher grades attend school in neighboring Hurricane. The city contains several large private schools for troubled youth, most visibly Cross Creek Academy. La Verkin has continued its small, incremental growth through the years, despite geographical limitations. There is a single large, modern market (Davis Farmer's Market), which includes a fuel center. Two coffee shops, and a casual dining restaurant, catering to tourists and locals alike. Law Enforcement; La Verkin Police Department and Washington County Sheriff's Department. Fire Department; Hurricane Valley Fire Department. Power Department; Rocky Mountain Power, Ash Creek Water District, managed by La Verkin City Power Department.