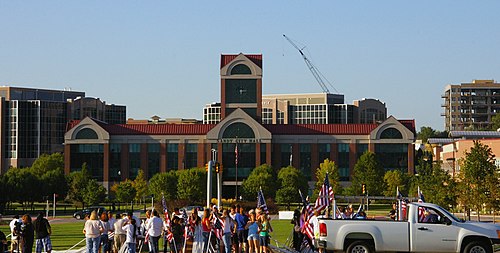 Sandy is a city in the Salt Lake City metropolitan area, located in Salt Lake County, Utah, United States. The population of Sandy was 87,461 at the 2010 census, making it the sixth-largest city in Utah. The population is currently estimated to be about 96,380 according to the July 1, 2019 United States Census estimates.Sandy is home to the Shops at South Town shopping mall; the Jordan Commons entertainment, office and dining complex; and the Mountain America Exposition Center. It is also the location of the soccer-specific Rio Tinto Stadium, which hosts Real Salt Lake and Utah Royals FC home games, and opened on October 8, 2008. The city is currently developing a walkable and transit-oriented city center called The Cairns. A formal master plan was adopted in January 2017 to accommodate regional growth and outlines developments and related guidelines through the next 25 years, while dividing the city center into distinct villages. The plan emphasizes sustainable living, walkability, human-scaled architecture, environmentally-friendly design, and nature-inspired design while managing population growth and its related challenges.