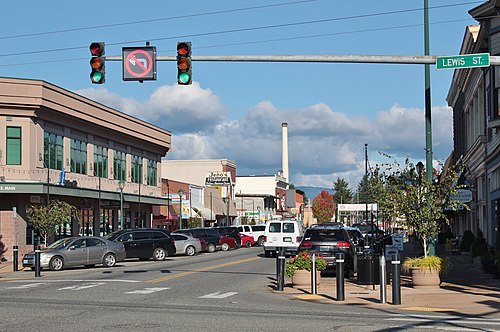 Monroe is a city in Snohomish County, Washington, United States. It is located at the confluence of the Skykomish, Snohomish, and Snoqualmie rivers in the Cascade foothills, about 30 miles (48 km) northeast of Seattle. Monroe's population was 17,304 as of the 2010 census and was estimated to be 19,776 in 2019. Monroe was originally founded in 1864 as the town of Park Place, located at the river confluence among several existing settlements in the Tulaco Valley. The townsite was previously a trading post used by the indigenous Skykomish people. Park Place was renamed to Monroe in 1890 to honor U.S. President James Monroe, and was moved northeast to be near the tracks of the Great Northern Railway, which was constructed in 1892. Monroe was incorporated in 1902 and was selected as the home of a major condensed milk plant and the state reformatory. Monroe became a suburban bedroom community in the late 20th century, serving commuters to Everett, Seattle, and the Eastside. It is home to the Monroe Correctional Complex, which absorbed the original reformatory in 1998, and the Evergreen State Fair, which runs annually in late summer. The city is located at the junction of two highways, U.S. Route 2 and State Route 522, which were expanded in the late 20th century to serve commuters.