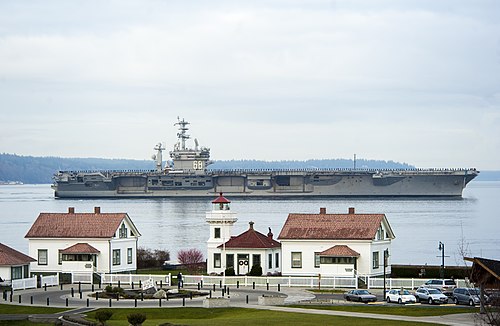 Mukilteo ( MUK-əl-TEE-oh) is a city in Snohomish County, Washington, United States. It is located on the Puget Sound between Edmonds and Everett, approximately 25 miles (40 km) north of Seattle. The city had a population of 20,254 at the 2010 census and an estimated 2019 population of 21,441. The current site of Old Town Mukilteo was inhabited by the Snohomish people prior to the arrival of American settlers in the 19th century. The Treaty of Point Elliott was signed in Mukilteo in 1855, opening the region to settlement. A new town was founded at Mukilteo and became the provisional county seat of Snohomish County in early 1861. The area remained a trading post for loggers and was home to other industries, but was overshadowed by Everett and grew slowly. Mukilteo was used during World War II as an auxiliary fueling facility, due to its proximity to the newly built Snohomish County Airport (now Paine Field). Mukilteo was incorporated as a city in 1947 and saw new suburban development, which accelerated after the opening of the nearby Boeing Everett Factory in the late 1960s. The city annexed large suburban areas on the west side of Paine Field in the 1980s and 1990s, including Harbour Pointe and the State Route 525 corridor, while also revitalizing the Old Town area in the 2000s. Today, Mukilteo is a bedroom community with a small job base centered around manufacturing industries. It is also a major transportation hub, with connections to Whidbey Island via the Washington State Ferries system, Sounder commuter trains to Seattle, and public transit services to nearby cities. The city is recognized for its quality of life and is one of the most affluent in Washington state, with a high median income.