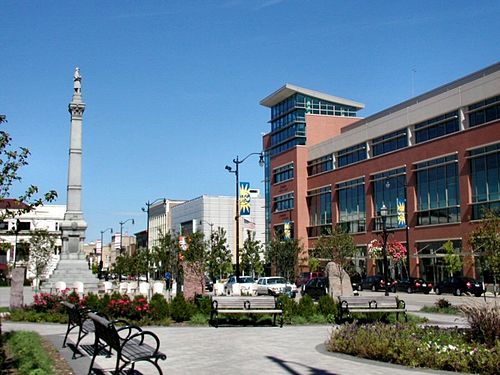 Racine ( rə-SEEN) is a city in and the county seat of Racine County, Wisconsin, United States. It is located on the shore of Lake Michigan at the mouth of the Root River. Racine is located 22 miles south of Milwaukee and is part of the Greater Milwaukee Area. As of the 2010 U.S. census, the city had a population of 78,860, making it the fifth-largest city in Wisconsin. Its median home price of $103,625 makes it one of the most affordable cities in Wisconsin to buy a home. In January 2017, it was rated "the most affordable place to live in the world" by the Demographia International Housing Affordability survey.Racine is the headquarters of a number of industries, including J. I. Case heavy equipment, S. C. Johnson & Son cleaning and chemical products, Dremel Corporation, Reliance Controls Corporation time controls and transfer switches, Twin Disc, and Arthur B. Modine heat exchangers. The Mitchell & Lewis Company, a wagonmaker in the 19th century, began making motorcycles and automobiles as Mitchell-Lewis Motor Company at the start of the 20th century. Racine is also home to InSinkErator, manufacturers of the first garbage disposal. Racine was also historically home to the Horlicks malt factory, where malted milk balls were first developed, and the Western Publishing factory where Little Golden Books were printed. Prominent architects in Racine's history include A. Arthur Guilbert and Edmund Bailey Funston, and the city is home to several works by Frank Lloyd Wright. It has several immigrant communities, and is among the most diverse cities in Wisconsin.