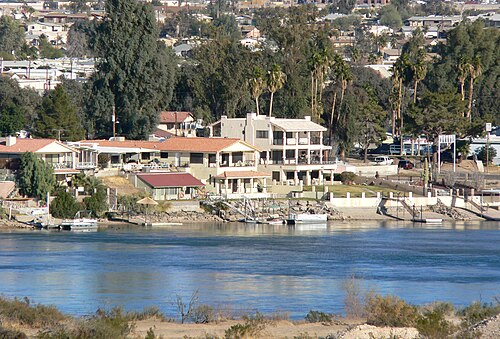 Bullhead City is a city located on the Colorado River in Mohave County, Arizona, United States, roughly 90 mi (140 km) south of Las Vegas, Nevada, and directly across the Colorado River from Laughlin, Nevada, whose casinos and ancillary services supply much of the employment for Bullhead City. Bullhead City is located on the southern border of Lake Mohave. According to the 2010 census, the population of the city is 39,540. The nearby communities of Laughlin, Needles, California, Fort Mohave and Mohave Valley bring the Bullhead area's total population to about 100,000, making it the largest micropolitan area in Mohave County.With over 59 square miles, Bullhead City is the largest city in Mohave County in terms of total land area.In 2011, the Laughlin/Bullhead International Airport was named Airport of the Year by the Arizona Department of Transportation. The latest figures indicate that "...more than 115,000 people flew into Laughlin/Bullhead International Airport on casino-sponsored charters in 2010." In the 1980s the airport was home to the helicopters of the TV show Airwolf.