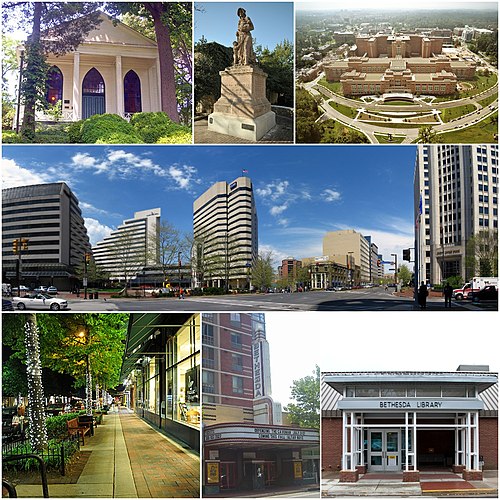 Bethesda is an unincorporated, census-designated place in southern Montgomery County, Maryland, United States, located just northwest of Washington, D.C. It takes its name from a local church, the Bethesda Meeting House (1820, rebuilt 1849), which in turn took its name from Jerusalem's Pool of Bethesda. The National Institutes of Health main campus and the Walter Reed National Military Medical Center are in Bethesda, as are a number of corporate and government headquarters. As an unincorporated community, Bethesda has no official boundaries. The United States Census Bureau defines a census-designated place named Bethesda whose center is located at 38°59′N 77°7′W. The United States Geological Survey has defined Bethesda as an area whose center is at 38°58′50″N 77°6′2″W, slightly different from the Census Bureau's definition. Other definitions are used by the Bethesda Urban Planning District, the United States Postal Service (which defines Bethesda to comprise the ZIP Codes 20810, 20811, 20813, 20814, 20815, 20816, and 20817), and other organizations. According to estimates released by the U.S. Census Bureau in 2013, the community had a total population of 63,374. Most of Bethesda's residents are in Maryland House of Delegates District 16.