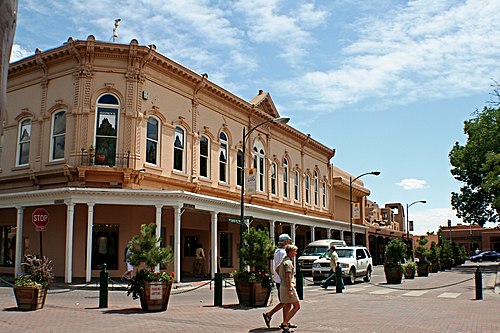 Santa Fe ( SAN-tə FAY, -⁠ fay; Spanish: [santaˈfe]; Tewa: Oghá P'o'oge; Northern Tiwa: Hulp'ó'ona; Navajo: Yootó) is the capital of the U.S. state of New Mexico. It is the fourth-largest city in New Mexico with a population of 84,683 in 2019, the county seat of Santa Fe County, and its metropolitan area is part of the larger Albuquerque–Santa Fe–Las Vegas combined statistical area which features a population of 1,178,664 as of the 2018 Census Bureau estimate. The city was founded in 1610 as capital of Nuevo México, after it replaced Española as capital, which makes it the oldest state capital in the United States. With an elevation of 7,199 feet (2,194 m), it is also the state capital with the highest elevation.It is considered one of the world's great art cities, due to its many art galleries and installations, and is recognized by UNESCO's Creative Cities Network. Cultural highlights include Santa Fe Plaza and the Palace of the Governors, and the Fiesta de Santa Fe, as well as distinct New Mexican cuisine restaurants and New Mexico music performances. Among the numerous art galleries and installations are, for example, Georgia O'Keeffe Museum is located in the city, as is a gallery by cartoonist Chuck Jones, along with newer art collectives such as Meow Wolf. The area surrounding Santa Fe was occupied for at least several thousand years by indigenous peoples who built villages several hundred years ago on the current site of the city. It was known by the Tewa inhabitants as Ogha Po'oge ("White Shell Water Place"). The name of the city of Santa Fe means "holy faith" in Spanish, and the city's full name as founded remains La Villa Real de la Santa Fe de San Francisco de Asís ("The Royal Town of the Holy Faith of Saint Francis of Assisi").