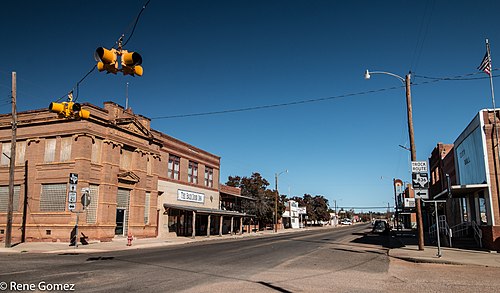 Spur is a city in Dickens County, Texas, United States. The population was 1,318 at the 2010 census, up from 1,088 at the 2000 census. A city council resolution passed July 2014 proclaimed Spur the "nation's first tiny house-friendly town." On October 9, 2009, Spur celebrated its centennial with the dedication of a monumental sculpture of a spur, created by local welder John Grusendorf. The event, sponsored by the Dickens County Historical Commission, was held at Dyess Park off Texas State Highway 70. On March 28, 2017, three storm chasers died when one of them, Kelley Williamson of Cassville, Missouri, drove through a stop sign at high speed and struck a car driven by Corbin Jaeger from Peoria, Arizona. Both men were killed, along with Randy Yarnell, a passenger in Williamson's car.