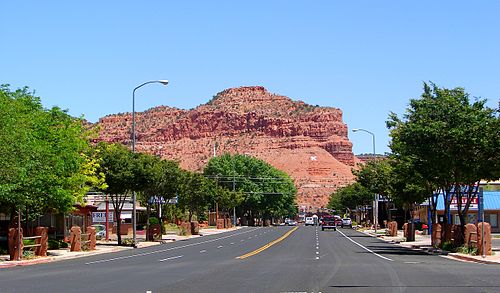 Kanab ( kə-NAB) is a city in and the county seat of Kane County, Utah, United States. It is located on Kanab Creek just north of the Arizona state line. This area was first settled in 1864, and the town was founded in 1870 when ten Latter-Day Saint families moved into the area. Named for a Paiute word meaning "place of the willows," Fort Kanab was built on the east bank of Kanab Creek in 1864 for defense against the Indians and as a base for the exploration of the area. The population was 4,312 at the 2010 census and an estimated 4,798 in 2018.Kanab is situated in the "Grand Circle" area, centrally located among Vermilion Cliffs National Monument, Bryce Canyon National Park, the Grand Canyon (North Rim), Zion National Park, Pipe Spring National Monument, Monument Valley Navajo Tribal Park and Lake Powell. Other nearby attractions include Grand Staircase-Escalante National Monument, Coral Pink Sand Dunes State Park, the privately owned Moqui Cave, and the largest animal sanctuary in the United States, Best Friends Animal Society. Locals refer to Kanab as "Little Hollywood" due to its history as a filming location for many movies and television series, prominently western, such as Stagecoach (1939), The Lone Ranger, Death Valley Days. Gunsmoke, Daniel Boone, El Dorado (1966), Planet of the Apes (1968), Mackenna's Gold, Sergeants 3, WindRunner: A Spirited Journey, Western Union (1941), The Desperadoes (1943), In Old Oklahoma (1943), Buffalo Bill (1944), Westward the Women (1952), Tomahawk Trail (1957), Fort Bowie (1958), Sergeants Three (1962), Duel at Diablo (1966), Ride in the Whirlwind (1965), The Shooting (1966), and The Outlaw Josey Wales (1976).