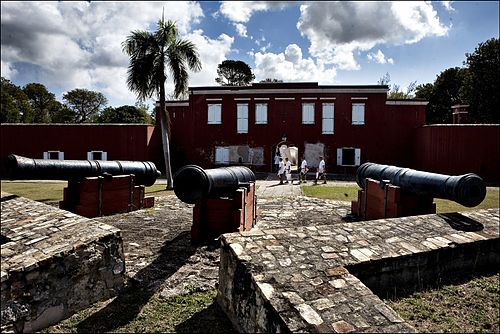 Frederiksted is both the town and one of the two administrative districts of St. Croix, U.S. Virgin Islands. It is a grid-planned city, designed by surveyor Jens Beckfor, originally to 14x14 blocks but built 7x7 to enhance the island commerce in the 1700s. Frederiksted has fewer than 1,000 people in the town proper, but nearly 10,000 in the greater western side of the island. Christiansted (mid-island on the north) is about 30 years older but commerce was limited by its natural, shallow protective reef. Frederiksted was built in the leeward side of the island (shadow of the wind) for calm seas and a naturally deep port. It is home to Fort Frederik, constructed to protect the town from pirate raids and attacks from rival imperialist nations and named after Frederick V of Denmark, who purchased the Danish West Indies in 1754. Frederiksted is often referred to as "Freedom City" by locals. This nickname has to do with the fact that the town was the site of the emancipation of slaves in the then-Danish West Indies. On July 3, 1848, freed slave and skilled craftsman Moses Gottlieb, who also was known as "General Buddhoe," led the uprising, organized slaves on St. Croix's West End plantations, and marched on the town of Frederiksted. The emancipation of slaves was proclaimed on July 3, 1848, at Fort Frederik on the waterfront at the northern edge of Frederiksted by Governor-General Peter von Scholten. Frederiksted is home to one of two deep water ports on St. Croix and is the sole port for cruise ships visiting the island. Passengers disembark at the Frederiksted Pier, where they may explore the town, enjoy the beaches, rent a car, or catch a waiting taxi that will take them to other points of interest across St. Croix. The other deep water port is located at the South Port which includes the tank farm of the former Hovensa oil refinery as well as Renaissance Industrial Park. The territory's legislature is also located in Frederiksted. There are also several government offices that occupy historic buildings. Briefly in the early 2000s, Frederiksted was a port for Seaborne Airlines seaplanes, which are based in the town of Christiansted. Seaplane service ended after less than one year of service due to a tropical storm damaging the port facility.