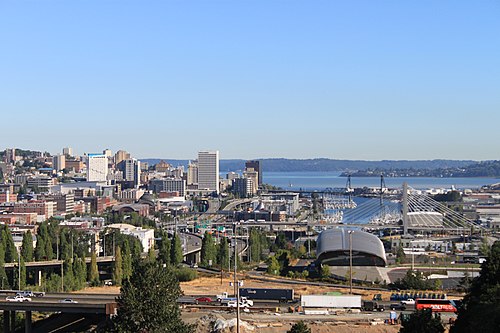 Tacoma ( tə-KOH-mə) is a mid-sized urban port city and the county seat of Pierce County, Washington, United States. The city is on Washington's Puget Sound, 32 miles (51 km) southwest of Seattle (of which it is the largest satellite city), 31 miles (50 km) northeast of the state capital, Olympia, and 58 miles (93 km) northwest of Mount Rainier National Park. The population was 191,704, according to the 2010 census. Tacoma is the second-largest city in the Puget Sound area and the third-largest in the state. Tacoma also serves as the center of business activity for the South Sound region, which has a population of around 1 million. Tacoma adopted its name after the nearby Mount Rainier, originally called Takhoma or Tahoma. It is locally known as the "City of Destiny" because the area was chosen to be the western terminus of the Northern Pacific Railroad in the late 19th century. The decision of the railroad was influenced by Tacoma's neighboring deep-water harbor, Commencement Bay. By connecting the bay with the railroad, Tacoma's motto became "When rails meet sails". Commencement Bay serves the Port of Tacoma, a center of international trade on the Pacific Coast and Washington's largest port. The city gained notoriety in 1940 for the collapse of the Tacoma Narrows Bridge, which earned the nickname "Galloping Gertie". Like most industrial cities, Tacoma suffered a prolonged decline in the mid-20th century as a result of suburbanization and divestment. Since the 1990s, downtown Tacoma has undergone revitalization effort. Developments in the downtown include the University of Washington Tacoma; Line T (formerly Tacoma Link), the first modern electric light rail service in the state; the state's highest density of art and history museums; and a restored urban waterfront, the Thea Foss Waterway. Tacoma has been named one of the most liveable areas in the United States. In 2006, Tacoma was listed as one of the "most walkable" cities in the country.